Plant a tree in memory of Beth
An environmentally-friendly option 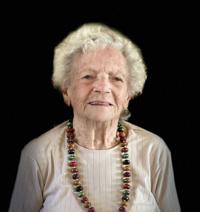 Beth Edgerton was born to Chauncy Edgerton and Lottie Woodworth, Christmas Eve, 1920. She was born in their new house on East Gleed Road in Lower Naches and would live in three different houses on that same road for nearly all of her life. Beth was the fourth girl born to Chauncy and Lottie, joining Jessie, Winnie, and Ruth. The Edgerton family moved to a new house on twenty acres just up the road about 1921. The family welcomed the additions of Philip, Dorothy, and Jeanne who were all born in the new house.

Beth began school in the Gleed School. This school was basically a “one room” school with mixed grades. She went to the Lower Naches High School and graduated from there. During these early years, Beth and the Edgerton family enjoyed spending time in the mountains and enjoyed many Sunday afternoon picnics there with family and friends.

When Beth and Ralph Christensen were planning to get married, they bought an acre lot from her parents and began building their new home there. Beth and Ralph were married October 30, 1939 in Yakima and moved into their new house. Beth and Ralph both worked in the fruit industry as well as starting a chicken operation on their plot. They sold eggs and fresh chickens to retail outlets in Yakima.

Beth and Ralph had two sons, John and Bill, born while they were living on their acre lot. When Beth’s parents were planning to move from their farm to a new house, Beth and Ralph decided to buy the 19 acre farm from her parents and they moved back into Beth’s childhood home. Beth lived in this house until her death.

When Beth’s husband became involved in commercial fishing, Beth and Ralph bought a second house in Westport. Beth spent many hours at the helm of their boat and later at the helm of her son’s commercial troller. She always enjoyed hosting friends and relatives at this “beach house.”

Beth was always active in her church, school, and community activities. She would often tell stories about various church group outings or social functions as a youth. Later she was active in church “Circle” groups, United Methodist Women, and would often help in the church kitchen. Beth was also active as a volunteer at the Yakima Senior Center and enjoyed many of the outings and classes offered by the center and particularly enjoyed the china painting group. Beth was a longtime member of the Lower Naches Garden club and was involved in establishing the rose garden at the Yakima Arboretum. Over the years, she shared many of her irises at the Naches ditch bank garden sales.

Beth was preceded in death by her parents, her siblings and their spouses, her husband Ralph, her oldest son John, her grandson John, Jr., and her great-grandson Justin Christensen. Beth is survived by her son Bill, her daughter-in-law Sandra, her grandson Peter and family (Trish and sons: Gregory, Nathan, and Cole), her great-granddaughter Rachel Christensen, and numerous nieces, nephews, and their families.

Viewing is scheduled for Monday, April 12, 2021 from 3:00 to 7:00 pm at Shaw & Sons Funeral Home (201 N. 2nd St., Yakima, WA 98901), followed by a brief Graveside Service at West Hills Cemetery on Tuesday, April 13, 2021 at 1:00 pm. In lieu of flowers, it is suggested that donations may be made to Yakima’s Union Gospel Mission or Yakima’s Wesley United Methodist Church outreach programs and sent in care of Shaw & Sons Funeral Home.

Plant a tree in memory of Beth by clicking here.
To send flowers to Beth's family, please visit our floral store.

A service summary is not available

Plant a tree in memory of Beth
An environmentally-friendly option

Plant a tree in memory of Beth

1 tree planted in memory of Beth

A Memorial Tree was planted for Beth E. Christensen

Plant a tree in memory of Beth